The article was about stress. Its sources didn't surprise me. How many people did they need to study to learn that medical diagnoses cause stress, or taxes, or bills, or bosses, or children that speak to you like Robert DeNiro in one of his mobster roles? My idea was to show an Everyman being hounded by all these things. This is what illustration does better than photography. A person photographed for this story would have looked confused or unhappy or maybe constipated. It appeared in the LA Times. 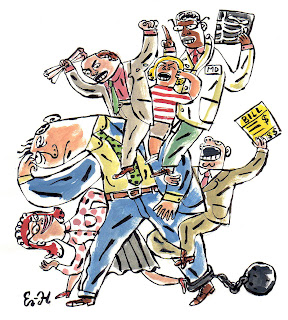 What do these mean? What do they suggest to you? And where was my head at when I began Bagatelle no. 1?

The first two in this series were painted for a gallery show in Florida that never came off. (The gallery folded the week I showed up for the opening.) Numbers 1 and 2 were in American Illustration a few years ago, but no design or ad work has come of it. The New Yorker asked me to do a series of these but never published them.

They are peculiar, allusive and vague. If they are "fine art" maybe I have no business doing them. Maybe they are the visual equivalent of my recent short stories, the ones that connect up but never answer the questions raised. These stories have been admired but, again, never published. If this category of work is a dead end it is at least an interesting and thoughtful one, but nobody these days pays people to think or suggest things they can't resolve neatly. 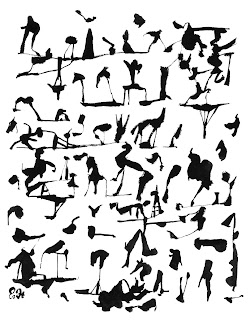 I did this illustration for Los Angeles magazine, art directed by the excellent David Armario. The story was about Musso & Franks, a Hollywood hangout that some say is haunted by the ghosts of the stars who once lunched there. Curious to know if you can identify any of these famous faces. 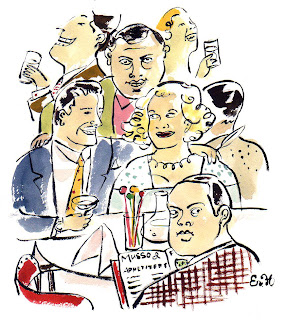 The best iconic images are blunt. Simple. Realism is unhelpful, really. It's distracting. When I was working on this I'd recently been working on a series of gesture images, with a more painterly and realistic outline, so I took effort here to make the fist awkward. Awkward because protest isn't graceful or lovely, it's rough and tumble, but also because awkwardly drawn anatomies are more sincere somehow. Cimabue is more sincere than Raphael. Ben Shahn is less slick than Norman Rockwell or Andrew Wyeth. It's as if we see the imperfections in a rendering and feel the need to look past them for something more. It isn't a realistic diagram or rendering so it must mean something too. Realism is itself. Unrealism is more suggestive. 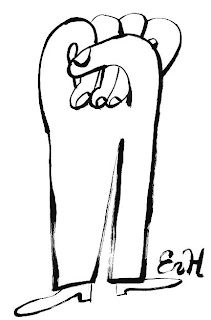 There are things a drawing can convey better than a photograph can. It's hard to photograph a feeling or an idea, an abstract relationship, a sense of oppression or liberation. Sure you can show the look on an individual face, and that's real, but even that is open to interpretation, relying on context or subtext for its meaning. A drawing can express something without explaining it. You nod your head without even knowing it. 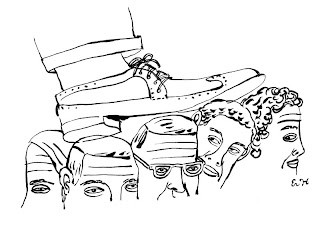 This is one of my favorites from the dot series. I love it because it is so meaningless, which is another way of saying it could mean anything. I do no sketches and study no reference for this kind of painting. I carefully paint the dots, then quickly add the icons. I can't be thinking of anything or looking at anything or trying to say anything, which sounds kind of like bullshit. I suppose it is. I'm curious to see what comes out of the brush when I'm not trying to draw anything in particular. If something concrete comes into my head I make sure it's painted upside down. This is called method. It's a variation on the method I use to paint bagatelles, a way of tricking the subconscious into committing itself to paper. 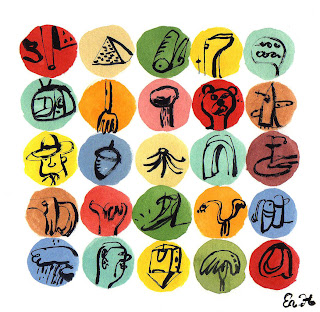 Nice thing about a blog: you get the chance to show-and-tell stuff that you love, sometimes stuff that never materialized into a book or a product or an ad. This is one such. A fun concept, an idea pitched to me from someone's I-Phone in NY, drawn that evening, then we all went on to other ideas and forgot about it. My files are populated with orphans like this. Cute though. 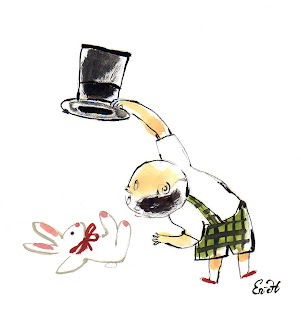 At this bleak time of year I try to think of the bulbs waiting underneath the snow. This is a sketchbook piece from several years ago, a fun experiment with collage. I did not clip the Gertrude Jekyll material out of one of my books, it's a xerox. 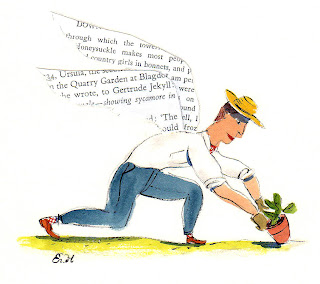 I've found that you can employ some artistic formulas for almost any purpose. Art history is full of annunciations and crucifictions; we use those familar poses and gestures all the time, repurposing them for our momentary use. They bring their own subtext to a new set of characters. It is like those flip books where you switch the head of one person onto the body of another. When you think about it, this is the essence of comedy. Upsetting our expectations, rearranging our perceptions, moving the furniture, wearing the wrong hat or the wrong socks. In Hitchcock's films there are a dozen situations where the hero is forced to masquerade as something he is not, usually in front of an audience. It makes us nervous, but we laugh. I could write a funny story around this series of small bankers. What has cast him in the pose of an Odalisque, with his pear and his wine? Who is he consorting with? This and several other small banker drawings will appear in The Believer next month. 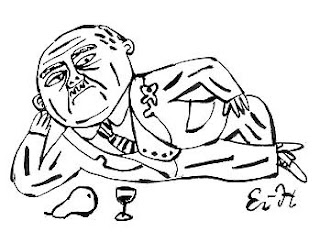 I drew this little man last year, and I thought to myself "He looks like he might be a banker." Expressionless, unmuscular, dressed in the proper uniform for denying credit to someone. A cold eye. Granted there are bankers out there who are wonderful human beings. Not him. This guy seemed to distill the essence of bankerness. I did a set of variations on him, in miniature, in a variety of poses and changes of costume, but always the same blank expression, like the face on an envelope containing a bill. I sent them to the magazine I usually send these small serial spots to, but answer came there none. So I sent them to Andrew at the Believer, who has always believed in me. And that's where they will appear next month. Watch for them. 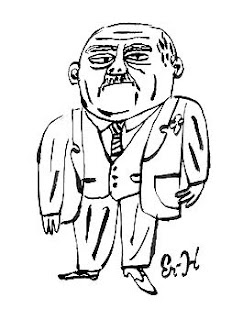 I sat down one morning and drew this. Don't know where the creature came from. Is it a bird or something else impersonating a bird? Why is it wearing a hat? How does the hat stay on when it flies? And how does it play that guitar with no fingers? These are questions the artist doesn't have to answer. 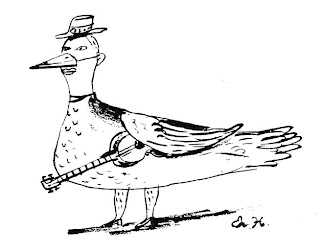 This is another image from my children's book WHEN I'M BIG. "When I'm big I won't need to use the bridge." The tunnel would probably present a problem too. Part of the distortion carries over into the perspective lines that don't match, the awkward modeling of the buildings. The paint application recalls when I was in elementary school and couldn't get enough paint on the brush to cover what I wanted to cover. 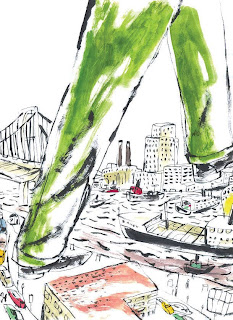 I did this art to accompany an essay I wrote for Leite's Culinaria, a tasty food website out of New York. I also used this dot style for my book cover. (See right) The gist and anecdotes of the essay came from the book as well. In essence: we eat and drink with people we know and love and we live another year. It's a survival behavior. I practice it religiously. 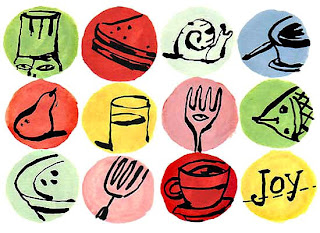 (A Book of Ages makes a lovely hostess gift)
Posted by Er-H at 1:06 PM No comments:

Email ThisBlogThis!Share to TwitterShare to FacebookShare to Pinterest
Labels: A Book of Ages, dots, drink, food

I drew this in my sketchbook last year and sent it around to the usual suspects, art directors who have uses for zeitgeisty images like this. But the market for zeitgeist is very elastic and vulnerable to cycles. I sense a fragile optimism out there, but we know the man with the saw is lurking just behind us, and we wonder if the one small balloon will keep us aloft for very long. 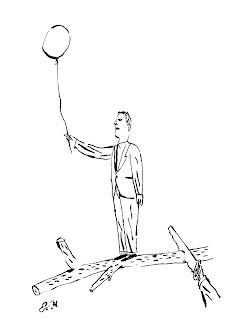 To be less trite and a bit more offbeat, I decided to put "Holiday" on the cover and the "Happy" inside. Anyway, this was our holiday card this year. Beautifully letterpressed by the Cranky Pressman. 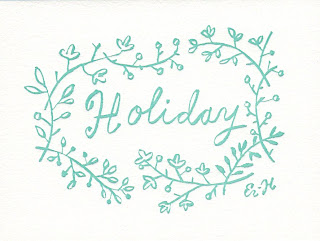 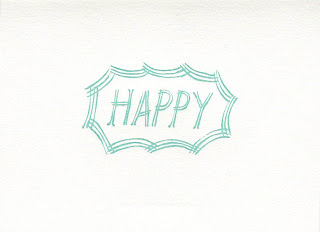