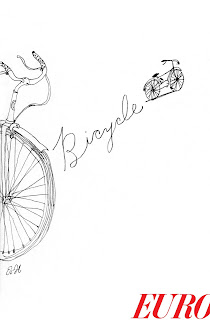 I did this image for a poster show designer Andy Powell organized at The Bikery, a bake and bike shop in Stillwater. The show is on into next week with plans to continue at the Bikery's new location in Marine-on-St-Croix.

I painted this for an African American magazine some years ago. An interesting assignment, but I remember having to repaint it because I'd gotten the skin color wrong, which surprised me. I don't know whether this was the acceptable version or not. It shows how sensitive we are to shades of difference. I did art for a Japanese liquor ad once. I remember being very careful to get the Japanese face just right, clearly Japanese but short of stereotype. The client kept having me adjust features: the nose, the skin color, the eyes. Finally they instructed me to make the hair blond. I told them I was confused; didn't they want the person to appear Japanese? No, they didn't. But instead of telling me so outright, they'd had me remove the ethnic distinctions one by one, and I'd carefully done so. 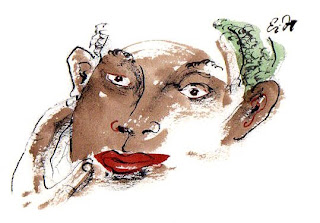 I think that was the subject described here. I love my job, even though it isn't set in an impressive office building. 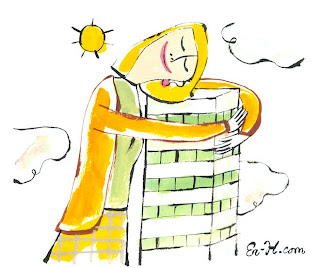 A Dog and His Servants

I found this in my box of drawings the other day and thought "what an odd drawing." A dog whose needs are met by a butler, a chef, a housekeeper? Probably not so unusual in some neighborhoods. I'm sure there's a funny children's book written along these lines. 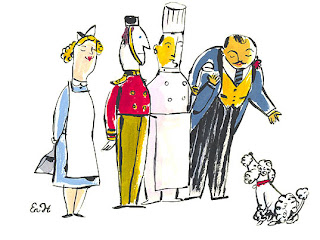 A Kind of Cowboy

I went to see Iron Man 2 with my son and a nephew over the weekend and was reminded of this painting I did a few years ago. Superheroes are a form of compensation, filling in the male audience's inadequacies. The same is true of large motorcycles and large guns. Is this a purely American phenomenon? It was very European prior to 1945, and I suppose the Soviets were a kind of cartoon. This image was in Lurzer's Archive's 200 Best Illustrators Worldwide. You never know why Europeans pick what they pick. 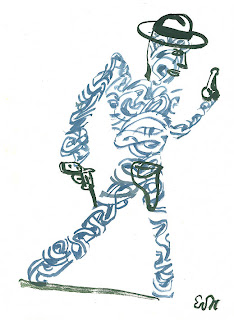 Heading into another summer weekend, I am remembering the games played many years ago, chiefly whiffleball. Basketball was played earlier in the year in our neighborhood, soccer later, football in the fall, winter was spent at the ski hill down the street. Whiffleball was perfect because it didn't require full teams or large yards. Baseball was organized; there were coaches who yelled at you, and umpires who called you out. Whiffleball was played with a ball that was lighter than air. It was disorganized, freeform, games usually broke up over disputed plays, making it a perfect reflection of childhood's dynamics. I did this illustration for an article in the Atlantic about a serious grown-up whiffleball league in Florida. Grownups always find ways of killing the joy of the game. I did my best not to flatter the athletes. Note the cleavage on the player in the middle. 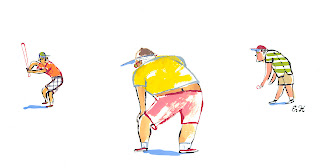 Another card from that deck created by Lisa Catalone. Simple line + bold, slightly offset color. She typeset from a font she and I created. Wonderful, really. (If I were a designer I'd know how to scan the printed piece minus the strobe effect.) 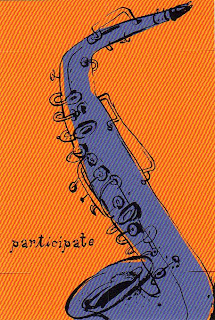 I've been in the travel business all my professional life, as a mapmaker and travel writer, but also trading in the iconography of places. When you think of a place what do you see? What is the single piece of architecture or landscape that serves as a marker? When I am doing an illustrated map it's these items that I arrange on it, like furniture, or photographs set on a piano. India=the Taj Mahal. Paris=the Eiffel Tower. Egypt=Pyramids. Etc. Tourist shorthand, but useful. This card was designed by Lisa Catalone. 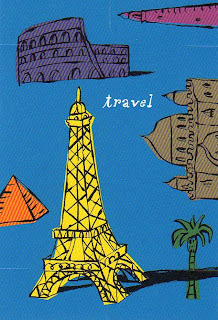 The household chore I enjoy most is that of resident artist. I am the one who draws cards for friends and family, cousins, in-laws, aunts, for birthdays, anniversaries, graduations, bar mitzvahs. I get to be my own art director––and tend to be pretty demanding. This was the second idea I painted for the occasion yesterday, and much better than the first one. 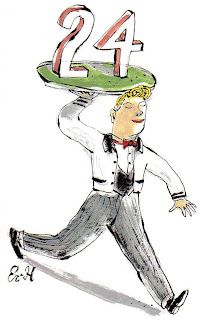 Maps are usually contained inside rectangles, and over the years I've become adept at decorating those rectangles, but once in a while a map is needed for an odd shape. It's fun when this happens. It's especially challenging when the shape doesn't match the landscape being set into it. Distortion is a useful tool, one mapmakers use all the time; after all our continents are inscribed on a globe, not a flat sheet. Catalone Design needed a map to go on the inside of a fold-out box designed to contain Q&A cards. I thought it was interesting that the shape is cruciform; the client was a Jesuit school. There is a bit of Ludwig Bemelmans and Abe Birnbaum in the handling of the buildings and the patterning in the trees. A nice piece altogether, thanks to the art direction of Lisa Catalone. 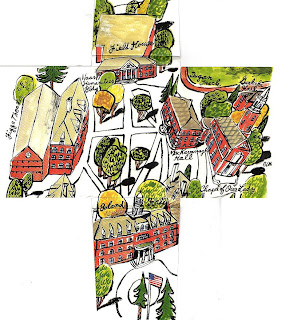 A sketchbook piece. What does it mean? Maybe it's a diagram of Facebook. 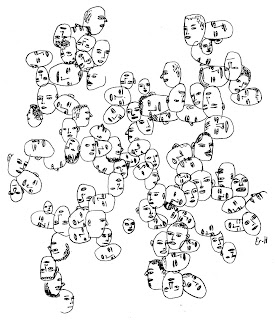