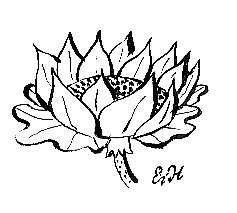 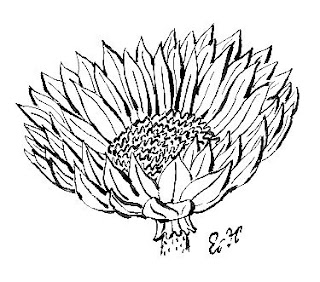 Not the sports car... These were a few of several done for Landor. Somewhere I have several others more abstract, and in a way more interesting. 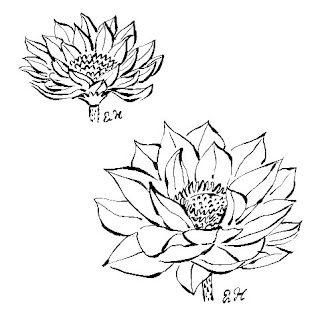 I painted this for my wife for our anniversary last week. Sometimes instead of a clever or disarming metaphor it's nice to just spell it out. (Illustrated lettering is an interesting solution for book titles and for magazine articles too.) 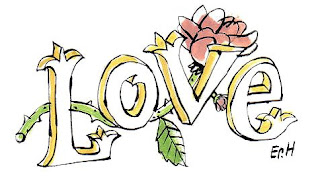 Back to School Shopping

The ads for pencils, erasers and school clothes have started appearing in newspapers already. You're reading the paper in the morning and out come these vilely colorful reminders of servitude. It is still July forgodssake. I am compounding the felony by inserting this art. Think of them not as tools of a dimly remembered punishment but as objects d'art. There is a certain "thingness" about a pencil sharpener drawn simply, and a pencil is just a hexagonal stick sharpened to a point with a bit of rubber at the other end.

A kind of still life I did for an alternative weekly. I honestly can't remember which one. 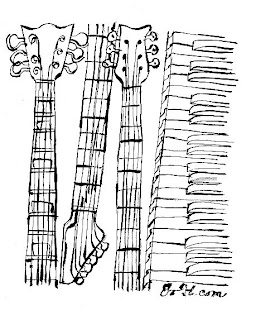 Invasion of the Moneylenders

When I did this illustration in 2002, articles were already being written about mischief in the banking industry. A cartoon machine seemed like the right metaphor at the time. I had no idea this drawing would become a business model. 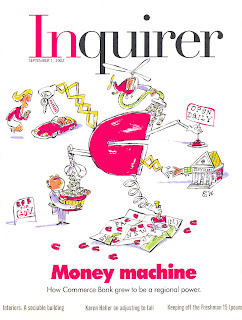 The topic was The American Conversation, a cross-disciplinary course about American thought and American thinkers and innovators. A fun project all around and a chance to do likenesses, not one of my usual categories. It was my idea to write the famous quotes on voice balloons cut from yellow legal paper––which I used then and still use when I write.

When it appeared in the magazine my art was superimposed on some stock imagery of stars and stripes, which took me by surprise. Illustrators and designers work best within an approval process, but stuff does happen. Did an editor or an editorial committee think the art was too drab as it was? Did someone think it required flags, and were they hesitant to ask me to paint an extra element? (I would have.) I recall giving the designer the license to move the elements around as needed; was this interpreted as license to collage my collage with someone else's stock art? I expect a deadline led to improvisation. I got several emails from people who loved what they saw in the magazine, but I was a bit embarrassed by it. I'll be happy to work with them again. The tricky part will be how I diplomatically suggest we not repeat what happened the last time. Next time the same designer will probably make my art look better than I expected. That's what usually happens. 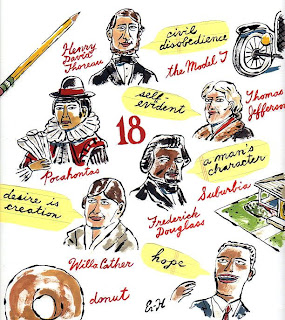 It's Friday. Everybody dance. 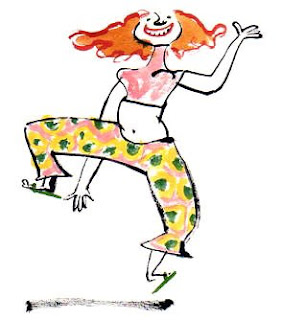 Email ThisBlogThis!Share to TwitterShare to FacebookShare to Pinterest
Labels: dancer

I did this for an indie rock magazine called Death + Taxes, published out of Miami. Creative Director Joey Parlett. Story about a guy contemplating trends and other metaphysical shit. Sorry, I meant to say stuff. If you lie down with rock journalists, you wake up with a more colorful vocabulary. This reminds me of that Philip Guston painting of the eye staring at the whiskey bottle. It also reminds me of my short sweet gig doing biweekly illustrations for Rolling Stone. It was thirty years ago and Jann and I were much younger. This is a revisiting of the style I used then. Loopy, offhand, with the occasional disembodied head. 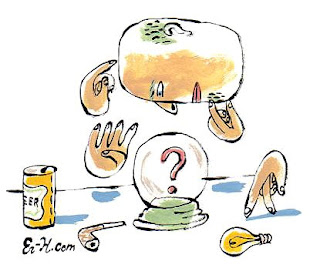 I did this illustration for a children's story I wrote quite a few years ago. Quite a few cups of tea have been consumed since and still no sign the story will ever be published. Thing is––everybody has stories. I'd be happy to illustrate somebody else's too. 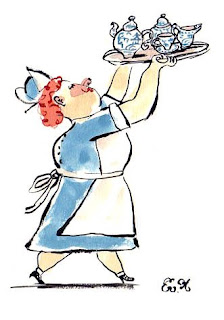 Email ThisBlogThis!Share to TwitterShare to FacebookShare to Pinterest
Labels: tea

This is the kind of day it is in Minnesota. Can't get much nicer. 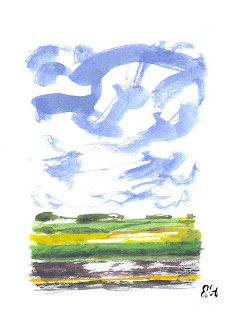 I did this illustration for the cover of a corporate magazine but I don't think anything in the magazine was about Paris or cafés or boulevardiers. But today is Bastille Day, so I thought it seemed an apt image. And who knows––maybe civilization will return to this side of the Atlantic. Maybe it already has, though not very many of us have the luxury of long afternoons spent discussing literature and culture. 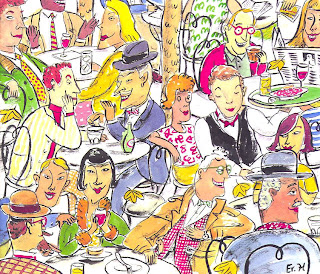 Even though most of the attention in Washington is focused on white male senators explaining why white men make better justices, and what's left is devoted to rich bankers insisting that rich bankers are the best ones to handle the stimulus money, health care is still the big issue. Bigger than Michael Jackson. This illustration is a metaphor for how our health-care system is set up now. 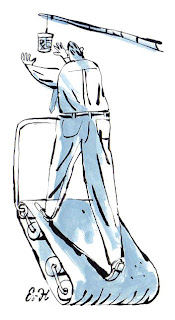 This LA Times story was about how piped in classical music curbed crime on the London Underground. The composer in police attire is Georg Friederic Handel.

Now that we've finally chosen a senator, we can go back to the age-old rivalry between the two cities. 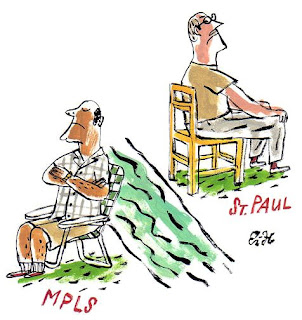 For several years I did a monthly pet illustration for Safeway Foods' magazine, art directed by David Armario. Cats, dogs, fish, birds, turtles probably too. The feeding of, chewing of furniture by, buying presents for. It was almost like having a pet. Over time I became a little envious of the lifestyle I was being asked to depict. It's been years since I've had a good massage. 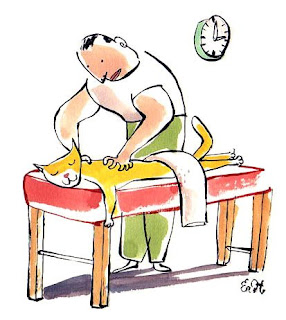 I found this in one of the boxes I keep art in. I collect old toys, and toys have often provided a medium for metaphor. This toy doesn't exist, but I constructed it out of bits and pieces of tintoys with their brightly printed surfaces and screws and flanges and seams.

What does it mean? The original drawing popped into my head at the time when aggressive CEOs were getting the legal go-ahead to seize worker pension funds. Sometimes the metaphor works better when it is suggestive rather than explicit. Although the fallout I'm suggesting is pretty explicit. And it's all come true. 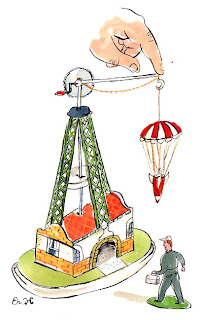