Just a drawing, nothing more. Sometimes the arrangement of shapes and details gives me an idea for another drawing. I did get an idea this morning from this but plan to let it sit for a while, look at it and think about it and come back to it later. 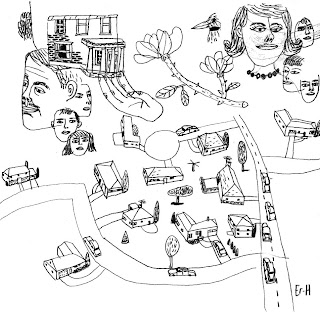 My eighteen year-old son is at one of those crossroads. I'd be surprised if he ended up on Wall Street, but it is one of the signposts. I did this illustration for Macalester College's magazine. Brian Donahue art directed. 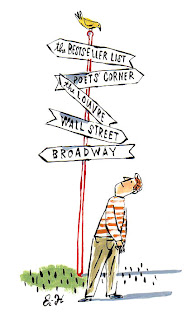 I was working in collage last week for a magazine in California. The topic was dance in various spiritual or picturesque settings around the world. Here is one early version of the art. The usual sketch-approval process doesn't work the same for collage. You have to find the elements before you can pitch them, which puts the artist and the art director out on a limb. But often the results can be wonderful and evocative in ways simple painted illustration is not. 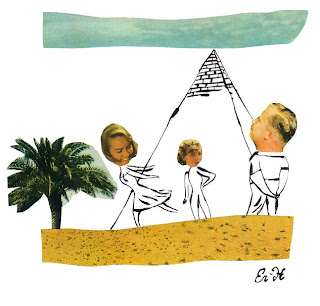 This is how it feels sometimes. Each of us moving in our own orbits, concentric and eccentric, occasionally colliding. 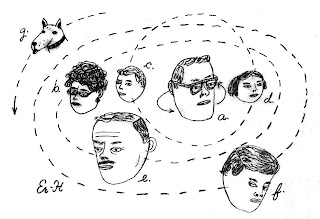 I did this sketch last week. We ended up going in a different direction but I rather liked this. 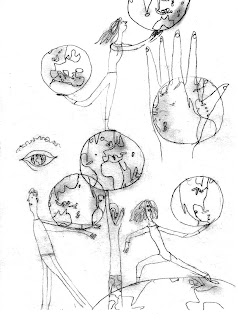 With hair topiary I may have invented a new style, a new vogue. Time will tell. For a few years I have been working on a series about hair. I wrote a children's story about hair. In A BOOK OF AGES it forms a leitmotif––when Hitler grew his moustache, when Steve Martin went gray, when Darwin grew his beard, when Hemingway's turned white like Santa Claus's. When he was a child Mike Nichols lost all his hair because of a short, acute illness, including his eyebrows; he's had eyebrow toupees throughout adulthood. I do not go into the topic of merkins, but perhaps that is next.

This was one of the first op-ed images I did for the New York Times. The art director then was Nicholas Blechman. The piece, as I recall, was about the difficulty of picking a language to use to address the polyglot Indian public. The building depicted is the Red Fort in Delhi. (I'm a little preoccupied with India at the moment because I am reading The Siege of Krishnapur by J. G. Farrell.) 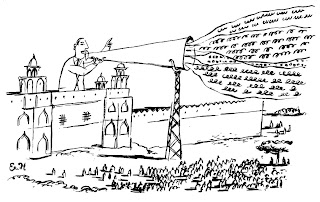 There is a quality I call "houseness," part of the larger rubric called "thingness." I can remember drawing houses when I was four and all the other kindergarteners drew their chimneys at a right angle to the roof instead of vertical. I felt quietly superior. I also made a special point of always including garbage cans and shrubbery next to the house, and telephone poles. This additional detail made it hard to include my full signature and I began signing my work Er-H. 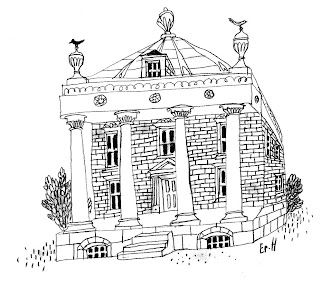 A Cover I Did for New York Review Books

I got a box of beautiful books in the mail yesterday. (My favorite packages contain books.) I painted the cover of this one for NYRB last fall. A fun classic long out of print. Louise Fili art directed. When I'm having fun with a project sometimes I'll go ahead and paint the concepts we didn't pick. They were all fun to do. I posted a couple of them earlier this year, here and here. But I liked this one best. It's a very entertaining read. The sort of book I can imagine grandparents reading to their grandkids. 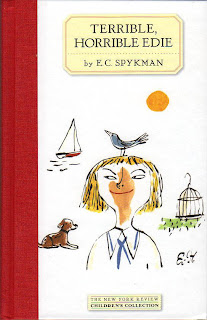 I did this map a few weeks ago for the Washington Post. It did not require traveling to all of the places noted or drinking all of the beers. (And, yes, I realize that Europe and America are not this close together, Europe is not this large, and Africa and South America do not overlap.) 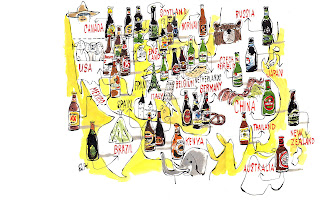 The subject was "perfect pitch." There are few concepts as unvisual as music is. You can draw a violin, but a singer needs a musical note inside a voice balloon to establish that she isn't a dental patient. But how do you illustrate the idea beyond that? Perfect pitch is an instinct that goes beyond simple comprehension. I inverted the other singer to suggest that two people might imagine the same note differently. I underlined this by inverting the B into a G. To get to the abstractness of it, the subjectiveness of it, I needed to employ a more distorted line, more Max Beckmanish. The awkwardness of distorted figures forces the viewer to make sense of it rather than simply absorbing the obvious content. Glib cartoonishness would be too simple, too smooth for that. Inversion is a neat device I've used before. I did this for the Hartford Courant, under the able art direction of Melanie Shaffer. 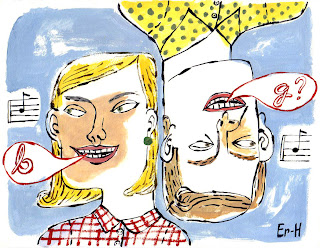 I did this illustration for a story about property and happiness. I"m the person on the left. 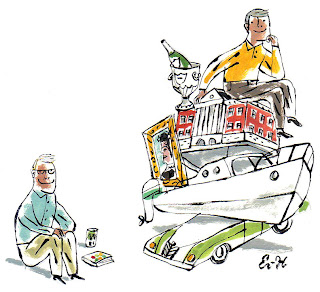 In the case of the digital revolution is the fire only virtual fire? I own books where you can actually feel the imprint of the type on the page. Ninety percent of readers under 30 will not know what that means or care. So, in a way, the Fahrenheit 451 scenario I described in the illustration has come true. Even the size of the machine is quaint and antique. While this revolution was taking place I was describing it almost weekly in magazines like Time and USNews and Technology Review, trying to keep up with the hardware, inventing new iconography and metaphors and shorthand for what was happening. 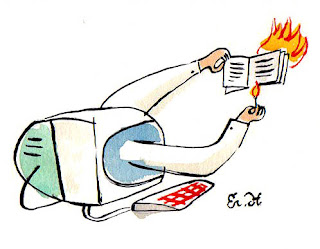 There was a time when our hardest choice was whether to spend more time in Florence or Venice on a trip to Italy. It's easier to show this in an illustration than a photograph. Photo reality makes this kind of metaphysical comparison seem implausible, but this is exactly how close Venice and Florence are inside our heads. (That is Florence on the left.) 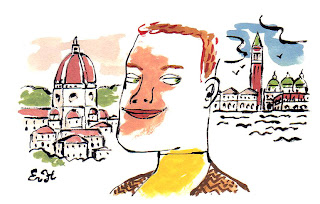 I notice that Lisa Birnbach and Chip Kidd are reviving a very useful anthropological study of Waspus Preppicus. Until I read it back in the 1980s I only knew chinos and loafers as my native costume, not understanding the class implications. I'd never visited the holy sites on Martha's Vineyard or in Westchester. I had gone to summer camp with children from Lake Forest and Winnetka but didn't at the time understand the sound basis for their scorn. I was like Nick Carraway. (As I've noted elsewhere, I went to the same college as the arriviste's arriviste, Jay Gatsby, though we never met, being from different decades.) Anyway, the Preppie Handbook opened my eyes. I still prefer chinos and I wear only loafers, always without socks. I have not worn socks with loafers since the late 1970s. 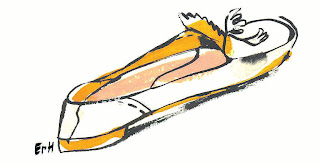 When I see patterns in nature I jot them down. Over the years I've stored up a disorganized but useful lexicon of items and shapes. A taxonomy of sorts. European ships that went out to exploit and colonize the world in the 18th century sent botanists along to collect plants for botanical gardens and zoologists to collect animals for zoos. These chaps in pith helmets organized their collections by resemblances and it's also how we organize our thoughts. There doesn't need to be an end in mind. Doodling is a kind of pure research. What does this drawing mean? I don't know. 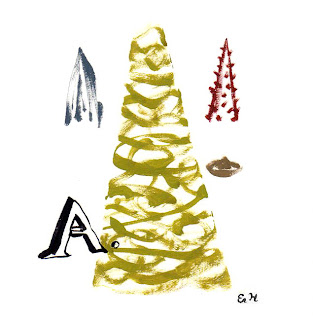 A Road Looking for a Story 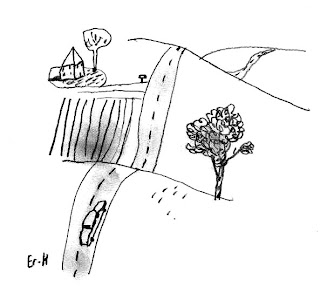 Someday I'd like to publish a book without text. Just a car on a road going somewhere. Side roads branching off, towns on the edge of sight, farms and yards obscured by trees, houses lived in by invisible people you'll never know. When I was young I found the side roads intriguing, but rarely did we turn down one. Other people knew where we were going but I didn't and didn't have any control over any of it. Life looks like this to a child, so maybe a book like this would be too much like their life, confirming all their existential worries. 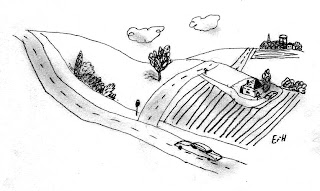 Illustrators are supposed to describe things. But the most important art we do is of things that are hard to imagine, much less describe. Things as they aren't, things as they would be if only. To get to that description I need to forget the rules I learned since age five. The probabilities and proportionalities. The first thing I jettison is perspective, because that absence immediately tells the eye we are in a different place, that anything could be true. I try to unremember style and fluid line and facility, to get back to how I drew before I learned how. That is where metaphor and satire become plausible. It's a subversive process. This is another illustration from a children's book I hope to find a publisher for someday, if I can find one as subversive as I am. 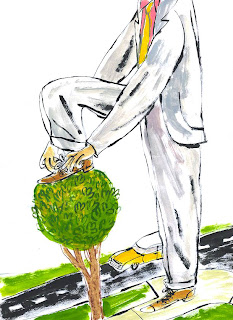