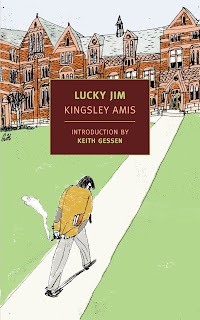 I never wanted to leave college. I'd found a place where your job was reading books. I liked the gothic architecture, the ivy, the rumpledness, the quiet. I did leave, but I still go back occasionally, usually by reading novels about college life, the best one being Lucky Jim, which I've reread every ten years or so with increasing admiration and relish. When NYRB asked me to illustrate the covers of Amis's novels for them I quickly began rereading them all, starting with Lucky Jim, which I found as richly amusing as ever.

I did several dozen drawings of Jim Dixon to start. I drew him with a pint in his hand, with a book, wearing a jaundiced expression, a bilious expression, a world-weary expression. Then I decided to do the reader a favor and let them visualize Lucky Jim how they liked. I turned him volte face, striding up a long sidewalk toward the college.

What college? He's a minor instructor at a minor redbrick college, not Oxford or Cambridge. Amis's biographers think he might have been visualizing Swansea (where he was teaching) or Lancaster or Leicester, but he doesn't say. I looked for appropriate examples of Midlands collegiate architecture and started drawing them. The final image is adapted from a wing at Liverpool University. I removed some of the soot and made the brick redder. Still, it looks appropriately prisonlike, because Jim Dixon doesn't like where he is. Unlike myself at his age, he longs for escape; the novel is escapist in that sense. Our hero is a boozer, a slacker, a mocker of authority, but in all things a colossal fuck-up, and his story is a masterpiece of slow-motion catastrophe. I hope I've done it justice.
Posted by Er-H at 9:17 AM 3 comments: 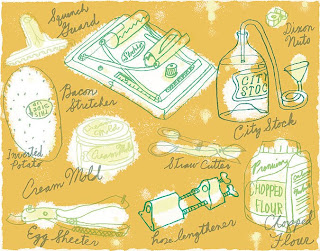 Gastronomica called and wanted me to illustrate a story about pranks. Pranks chefs and sous chefs play on each other. A couple of approaches seemed to work. A plain funny drawing of chefs playing tricks––I drew something inspired by the MAD series Spy vs. Spy, sly looks, furtive cooks lighting matches in each others' cooking clogs. Another part of the story was about the phony equipment requests chefs send the new guy in search of. That's the idea that gelled. It required drawing a number of specialized tools that don't exist, never a problem for me. I think it turned out rather well. The art direction was by the excellent and seldom mischievous Frances Baca. Look for this art in the forthcoming issue. There are several articles in it that I plan to read over lunches this week...