I can almost hear the crack of the bat. Hello baseball. This sketchbook painting is from a few summers ago, but the ballplayer is from longer ago when muscles were grown by hauling ice and lifting bales. 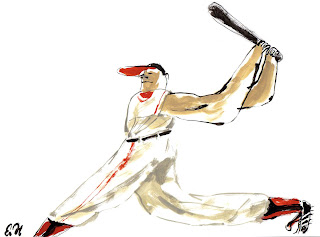 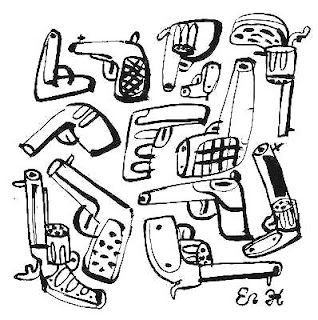 On the 30th anniversary of the attempted assassination (and subsequent deification) of Ronald Reagan, it seemed fitting to put up some handgun art. It's also the anniversary of the terrible injuring of Reagan's press secretary James Brady. Brady never recovered, never got his job back, and then lost many of his friends when he and his wife began an organization opposing gun violence. He was demonized by some of the same people who deified his former boss. Irony is lost on some people. I did this drawing for a group that opposes handgun violence, but it was never used. And I see why. The guns I drew are simply too interesting, too fun, too iconic. They are like toys or playfully phallic little machines, perfectly sized to carry in one's pocket. I grew up playing with toy guns, so maybe some of this old fascination endures like a tattoo you forget you have, but I outgrew my boyhood gun fetish. It's fun to draw them and watch movies about them but I don't own one. They seem like relics of an interesting former age.
Posted by Er-H at 11:18 AM 1 comment:

I did this illustration for a Time magazine article about grade inflation, a fashionable topic at the time. What's interesting to me, and I don't hear it discussed at all, is how much smarter our kids are than we were. Since business metrics were applied to public schools during the Reagan years, and we began requiring test scores to climb by X amount per year, and Y amount per dollar expended, I calculate that our children's brains have grown to around 2 1/2 times larger and 5 or 6 times faster than ours were at their ages. So maybe grades haven't inflated enough. 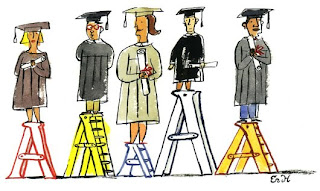 I watched an old home movie last week and there was one scene of a kid fifty feet up a hickory tree; myself at age nine. I was always climbing trees. With three children, my parents obviously were not terribly concerned. I was a spare. I'd given it up years before the New Yorker called me to do this illustration, but my familiarity with the sport (can I call it a sport?) made the assignment a felicitous one. There are actually tree climbing competitions, apparently. Wish I'd known this when I was nine. I think what makes the illustration work was my decision to render the tree in black and white. Black and white makes colors more colorful. Owen Philips art directed. 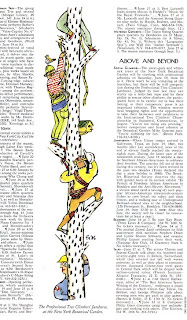 A few years ago I was asked to illustrate an article about a middle aged hippy dot.com millionaire who was dabbling in real estate. I decided to depict him this way, with a millionaire's top hat, Hawaiian shirt and sandals, playing with houses. Which just about describes it. 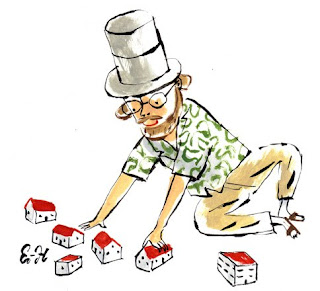 At this time last year our lawn was beginning to green up. This year it's still under two feet of snow. That's March for you. But studies carefully conducted by university scientists have shown that spring does inevitably follow winter, at least in theory. Unless the melting polar icecap has found a new home in southern Minnesota. I did this illustration for the Washington Post, where they've also had their share of snow this year. But I'm sure spring is much further along in DC. I envy them. 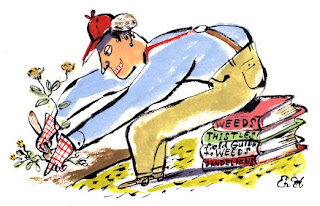 Vacationing With Tweety and Sylvester

I did this illustration for an article about vacationing with pets. A concept I've never had the luxury to explore, but, hey, there are people whose pets have more disposable income than I do.

Dreaming of playing the Saxophone

I have the same dream once in a while. I'm in a jazz club, one of those places with lots of smoke and a low ceiling and the sound of ice clinking in cocktail glasses, and I'm onstage playing the saxophone like Stan Getz or Paul Desmond. In this dream, it's as easy as touching the valves on the instrument. 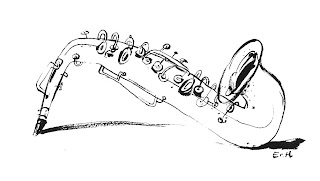 When we were in Rome we stayed a stone's throw away from what many consider the most perfect building in Europe. It's tucked away at the top of the Janiculum Hill, and worth the climb. There is something felicitous about a quick drawing, imprecise and imperfect, of a precise and perfect building. 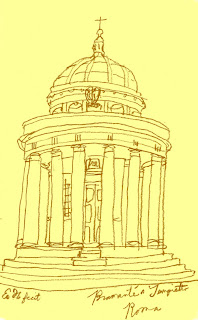 I can't remember who I did this for, possibly for a magazine called Business Ethics, art directed by Mark Simonson. Nor can I remember what concept I was describing. But it could be a diagram of our moneyed lives. I see a lot of Brad Holland influence in the line. I used to do a lot of crosshatching. Also a bit of David Levine, and something of a Minneapolis artist I admired named Pete Bastianson. Wonder where he is today, possibly surfing daily off the coast of Baja. I can picture it. 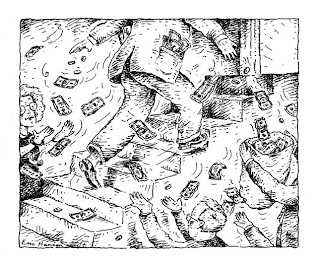 A chair in a photograph in an old house. I just like the look of it. I don't know if it's comfortable. 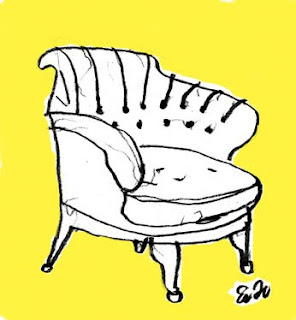