How Not To Cut

I woke up Monday morning to an assignment from the NYTimes. One of those neat little drawings that draw the reader's eye to the letters on the editorial page. Maybe this is why they are called drawings.

The subject was the one on everyone's mind: the draconian sequester cuts––it's unusual when two of the three words describing the issue of the day are words nobody uses much and most people couldn't define for you. We have half the country enthused (to the point where they should maybe go lie down) about cutting federal spending. What's interesting is the people most rabid about cutting are the ones whose lives and whose districts would be most negatively affected. Here's where we enter the realm of unintended consequences. ("Honestly, doctor, I didn't realize I shouldn't cut that branch closer to the trunk than the point where I was sitting on it.") It's the Red Districts that receive most of the federal dollars and they also, conveniently, pay less in taxes than they receive. There is a Snopesian cleverness about this which I almost admire. But it is hard to squeeze all of these thoughts into a drawing the size of your thumb. So, as always happens, I resorted to metaphor. And there is actually a thumb in the metaphor, although it isn't the thumb which the budget cutter is about to sever. 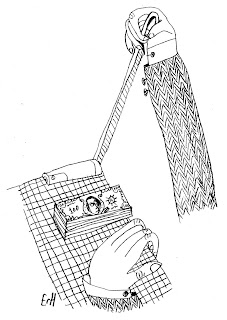 Point is, we don't always think about deeds and consequences. Sometimes wars cost money. Sometimes poisoning the air winds up poisoning the people who breathe it. Sometimes cutting federal spending during a severe economic downturn ends up cutting the only spending that's happening. At which point the economy begins to lose any semblance of a pulse.

Republicans and rich people like to give advice to the poor about thrift, but only poor people know thrift.  They are experts at it. The Republican gasbags (there are Dem gasbags too) like to preach the morality of spending cuts "to save our children". They preach austerity while driving large cars and owning twelve homes. Forcing austerity measures on an economy during a recession is like starving your children to protect their inheritance. Which sounds stupid, but to rich people it's actually smart, because after the children of the poor starve, their money carefully unspent will remain in banks where the rich can go on playing with it. I enjoy drawing pictures describing damnfoolishness like this.

(I would like to thank Ben Shahn and Ludwig Bemelmans and a few others who taught me how to draw hands and papercutters.)
Posted by Er-H at 11:31 AM 1 comment: