The Puzzle of Egypt

I did this illustration for a feature article in the Atlantic, probably something by P. J. O'Rourke, whose pieces called for an ironic edge. Despite everything, Egypt is still there, still sweeping its problems under the pyramid, so to speak. Rioting erupted this week, in reaction to events in nearby Tunisia, and the riot police were called out. The Nile and the adjacent desert appear to be unaffected. 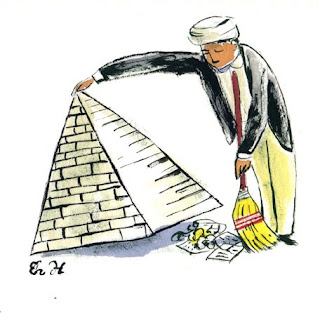 I did this a week ago for Children's Advocate, a magazine published out of Berkeley, but art directed by my old friend Patrick JB Flynn out of Madison, Wisconsin. (Isn't web commerce marvelous?) It was a fun project, especially since I'd just converted some of our old family videos to DVD and we'd been watching our kids toddling around at this young age. (They are now taller than their parents.) The tilted overhead perspective is something I used to do more often. I think I probably learned it by studying Steven Guarnaccia's illustrations years ago, who probably learned it from Japanese prints. I learned from the same sources that narrowing my palette made the composition more coherent, and that gray and black made the other colors brighter. 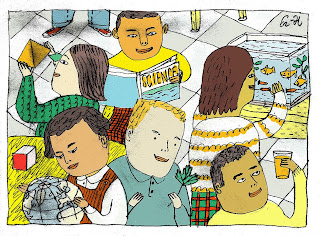 I did this illustration for Shambhala Sun magazine, art directed by Liza Matthews and published out of Nova Scotia. (Who knew N.S. was a major center of Buddhism?) The story told how one man's peace and quiet was disturbed by a neighbor's rock music, and how he restored peace. The suburb he lived in happens to be called Wedgewood, which suggested the ceramic metaphor. 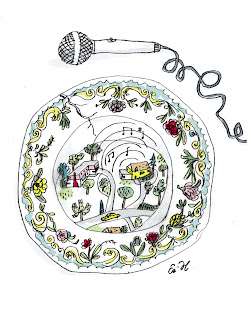 I did this illustration for Technology Review (M.I.T., art directed by Lee Caulfield). Another metaphor for a technologically advanced planet, but consider the fragile filament, and the fact that the large hand (of fate? of God?) is about to turn it off. 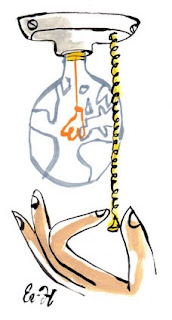 I did this illustration about ten years ago for the Philadelphia Inquirer's Sunday Magazine, for an article about eating habits. I probably went out and had a bar hamburger, just for research purposes. It's interesting for me to look at how much my line varies from image to image. Sometimes it's careful and controlled, almost quiet, other times (like here) the outline darts in quick parabolas. The arms are rubber and the physique is joyously oddball. This is not a careful drawing but it isn't sloppy; I like to say it's offhand. Like something drawn by Bemelmans. It was Bemelmans who gave me permission to quit worrying about all the live figure drawing I never got around to. 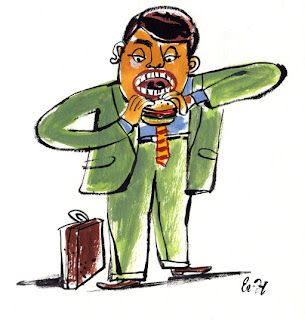 The Politics of Tea

I wrote a little bit about the original Boston Tea Party in my book. Those hooligans were as ragtag as the current ones. They too were worked up about politics outside their control; then it was about overseas trade more than taxes to fund social programs. (There were no social programs then.) Today's tea partiers have legitimate fears, fears that many of us share. It's the way those fears are being channeled that should worry us. Also in my book is the story about John Adams, a young lawyer, who in the aftermath of the Boston Massacre, undertook the legal defense of the British soldiers charged with murder. Today he would be hung in effigy. Our early democracy was more complex and open-minded than many of today's so-called "patriots" would like to believe. 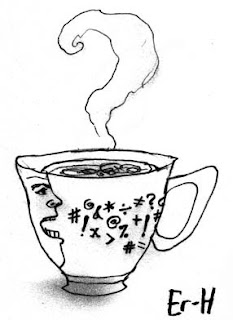