I did this map of a "typical college campus" for the people at FISH. I had to ask myself What comprises a typical college campus? There'll be a stadium, a science building, the student union, but what else? What makes frat row look Greek? It has nothing to do with Ionian columns or classical sculpture. I once described our local university as a museum of relegated architectural forms (I cribbed the analogy from F. Scott Fitzgerald) and therein lies its charm. Its heterogeneity demonstrates the importance of liberal education, of not settling for one form. Perhaps uniformity shows lack of imagination. 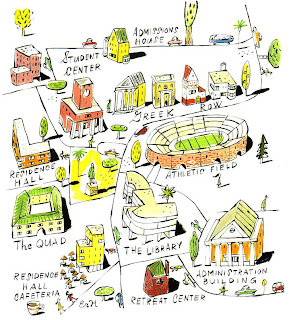 I used to visit Marshall Field's State Street store when I was a kid. Not unattended, mind you. The first time I was ever mislaid was at Marshall Field's; luckily I was discovered and raised by a kind family of gypsies who made me what I am today, but I'm digressing. The point is, the Department Store of my imagination is always that store. The enormous first floor ceiling upheld by white Greek columns, the islands of curved counters, the staircases, the Walnut Room for lunch. Never mind that the store no longer exists––by that name, I mean. It was a singular pleasure to design a shopping card for them several years ago, before Macy's acquired them. I'd done a similar cutaway illustration of a department store Christmas, published by Graphique de France a few years earlier, and subsequently published in a calendar in Japan. This was a miniature version to be carried in your pocket but the store in my imagination is still enormous and full of wonder. 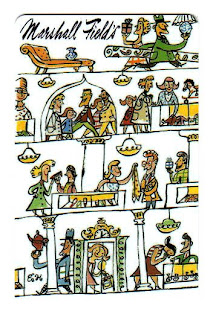 The guy in the hat was a sketchbook piece, the old gardener was a character in a children's book I was writing. Sharon Werner put them together into this promo, wrote the rhyming copy, inserted the commas, and voila. Good design makes interesting art more clever. The old guy isn't glamorous, but the color and texture are, and the context is sophisticated. The children's book remains unpublished, but I got some nice jobs out of this promo, some of them pretty glamorous. 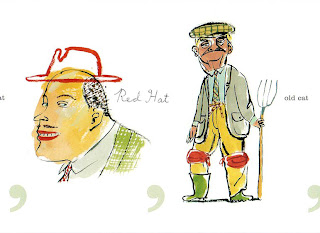 Fans are like bicycles, simple but complicated to draw, and perfectly iconic, suitable for the metaphorists bag of tricks. What can a fan represent? What can't it represent? I was always afraid of fans, especially ones like the one depicted here which practically came with instructions on where to insert fingers to have them lopped off. Thousands of dolls, toy soldiers and small insects have met grisly ends in fans like this. I never harmed anyone or anything; I didn't need to. I could picture what would happen. A fan is a strangely violent instrument for cooling you off. 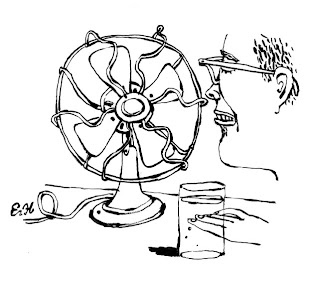 I did this for a concert poster for my son and daughter's school. Musical instruments are difficult enough to depict, with all those knobs and curves. Add in the instrumentalist and it becomes even more complicated. The cello has such a voluptuous shape, it seemed amusing to wrap someone thin and angular around it. 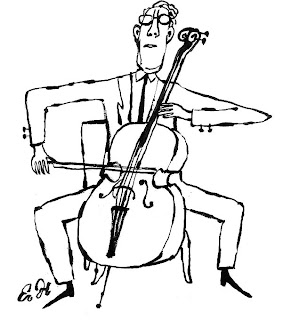 Art museums butter their bread with "art installations", rooms filled with art that looks like plain ordinary stuff artfully arranged. (I collaborated on a screenplay years ago about an art detective. The funniest line from it was written by somebody else. The detective enters a museum gallery which is filled waist-high with mud and says: "I can't believe this is a forgery.") This is an illustrator's version of installed art. We all collect things. I collect old toys, and they turn up in my art. The arrangement here is influenced a bit by Saul Steinberg, but also (in the styling) by Elwood Smith and Steven Guarnaccia and Seymour Chwast. Our minds are all shadowboxes full of items glued together by Joseph Cornell. The art director on this was Rick Besser, but the art was never used. 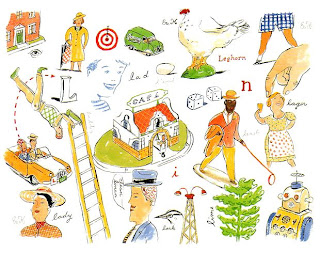 This illustrated an article about how guys sometimes have a soft, sentimental side. Implausible as that is, this turned into a fairly charming illustration. Sometimes I like leaving the background landscape in black and white. In this case it creates a separate dreamlike dimension. But often a client will ask if I've forgotten to paint in some of the colors. 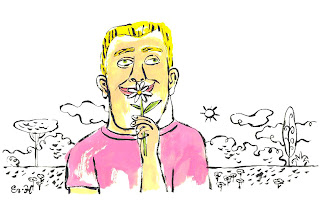 For several years I illustrated a monthly pet column for a west coast magazine. This particular column was about dogs chewing furniture. An illustrator has a license to exaggerate things a little, imagine things out to their sillier extremes. I doubt a photographer could get a dog to do this in a photo shoot. 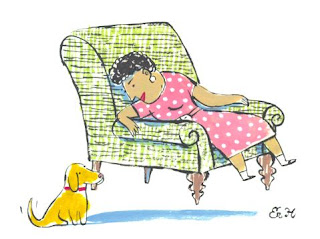 Another one of those dry, pleasant, quiet Minnesota days. 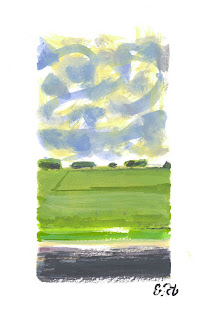 I drew this for a wine box for Pottery Barn, but the product never appeared. Still, a fun drawing, turning a gothic pile into a hip bit of filigree. It's like building something elaborate out of tinker toys. Trying to use minimalism to depict the baroque.