My best portraits are invented ones, pictures of a type rather than an actual person. This is a grave admission, which will deter people considering me for lucrative jobs depicting company chairmen and rock stars. Actually rock stars I might be able to depict pretty successfully; it's their persona you need to capture, not the subtle arrangement of nose and eyes and mouth, which have probably been rearranged anyway.

This old buffer is meant as a story: the expression of regret, the background divided between his country house and the Somme. The chicken is supposed to represent a long ago moment of cowardice. Right now I am trying to remember, were there tanks at the Somme? I don't think so. And I think the stripes on his Eton tie are a little too close together. 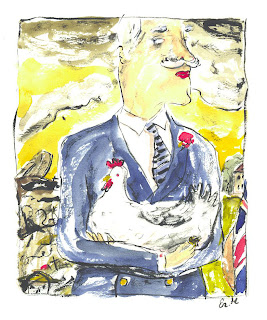 I love drawing jazz players. I think it's because I can't play myself. Unless you count stereo; I can play that. 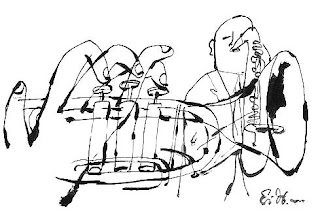 The Terrible Truth About Grown-Ups

Story time was improv. Every night I'd sit down and wing it.

One night I decided to riff on the things kids don't know about grown-ups. For instance, that we play with their toys when the kids are in school. Sometimes we even let friends of ours play with their toys. The worse the behavior the more she laughed. If it's preposterous it's funny... but maybe it's actually true. That uncertainty makes it funnier. The tradition goes back to Struwehlpeter and to Belloc's Cautionary Tales, but these tales don't warn kids to behave. The idea is to warn kids about grownup behavior. The bias probably shifted to the child's side with Roald Dahl. Like I said, I hope I'm able to get this published before my kids are grownups themselves. They might not think it's as funny then. 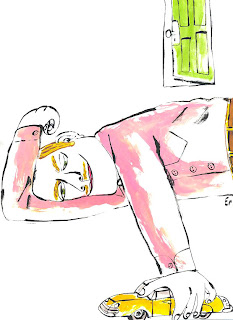 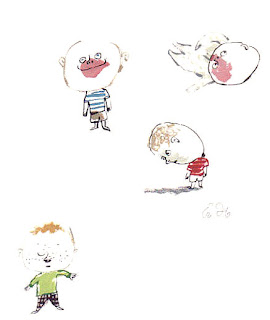 We live in one of those circular houses where the dining room opens into the hall, which opens into the living room, the T.V. room, the kitchen, the pantry and into the dining room again. When our children were small we liked to play a game, which we called “Chase.” I would walk and they would run away from me, all shrieks and laughter, around and around the house. The game was most popular at bedtime when they wanted to avoid me anyway. I’m not sure if the game wound them up or tired them out, but at the strategic moment they would choose the escape route up the stairs. I never explained to them that this meant that I had won the game.

Madeline always preferred her mom at bedtime: Mom’s special interpretation of Peter Rabbit, Mom’s way of straightening the room and drawing the curtains, Mom’s lap, Mom’s hug and kiss goodnight. No boys allowed––until recently. It may have been a night when Mom was away at her book club. The game of chase was full of the usual shrieks and laughter, but they turned to tears as we went upstairs. It was too dark outside. I was reading all of the books the wrong way. I managed to get her into bed. I tucked her in and turned out the light, but I wasn’t Mom. So I told her a story about how, when I was her age, I had a dog named JoJo, and how JoJo had missed his mom and had decided to write her a letter. I have been a part of Madeline’s bedtime for a long time after that.

There was something wonderful about sitting there beside her bed in the dark and filling her seven year-old head with lies. I did have a dog named JoJo, and he was a dachsund, and he did like to run away at the drop of a hat (just like Madeline), and I was once a child exactly her age, but JoJo didn’t write letters to his mother or to anyone else, nor did he decorate our Christmas tree one year with my sister’s flowery underpants, nor did he ever play minor league baseball or climb trees. But she didn’t know this, and if she suspected she didn’t told me.

There was a certain amount of pressure every night. I never tried to think of a story until the lights were out. Sometimes the story wasn’t terrific, and there were many wonderful, densely-plotted tales which she didn’t heard all the way through because she’d fallen asleep, which was the point after all. Or was the real point that I’d found a way around the “girls only” policy at bedtime? I’m happy I did, for a while anyway. And I did it not by reading one of the four or five new books about fathers and daughters that come out every year. I just stumbled across it in the dark.

(The drawing is from my sketchbook. The story was published a few years ago in a magazine for fathers and daughters. I'm hoping some of the stories I invented and told to Madeline during that time are published before she is done with college. We'll see.)
Posted by Er-H at 4:45 PM 1 comment:

I like spending time in antiquarian bookstores. I seldom find what I am looking for, which is exactly the point. Finding what you didn't know you wanted or needed is more fun. It adds something to the work, whether I'm writing or illustrating. I think it's called "cross-bred vigor." Uniformity is boring. So, I wasn't looking for it but I found a book filled with Renaissance and Baroque imagery: moons, suns, heaven, hell, planetary machinery, angels and demons, a catalog of supernatural rigamarole. I'd forgotten how to crosshatch, but it was fun relearning it. Dead masters can teach you a lot. 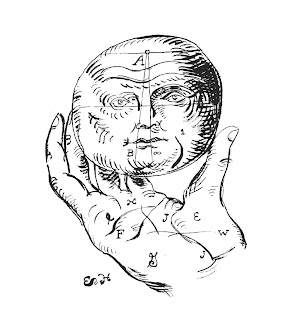 The cigar has fallen on hard times. Once the sly device of witty men who used it to make you wait for a punch line––think Groucho and Churchill, Ernie Kovacs and George Burns; Bugs Bunny substituted a carrot––it's now the thing lobbyists light up. It's the only item certain oversized, overpaid men can still hold at a jaunty angle. It remains a useful device for metaphor. Cigars signify money and power even if they no longer imply wit or polish. This drawing appeared in my sketchbook in the week when Bush did something especially sneaky to the Clean Air Act. 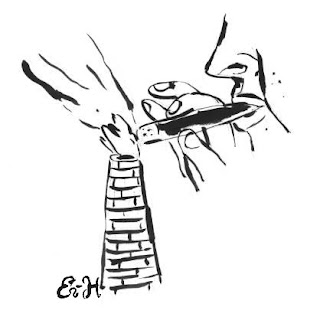 Of Bell Jars and Education

This art appeared in yesterday's New York Times, on the home page and the op-ed page. It's amazing how many people notice this small spot. I've gotten comments from people in California and Europe on these little thumbnails. The challenge of squeezing what is sometimes a very complex idea into a small space is formidable, and the turnaround is very very quick, a couple of hours. But it's fun. 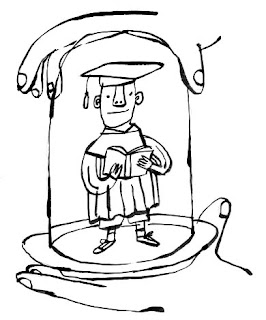 This LA Times story was about the hassle of renovating a house while living in it. Sharing domestic space with workmen is a familiar nightmare. Nice as they are, they steal your privacy and comfort. They arrive every morning early, armed with two by fours and hammers and the noise of electric drills. I drew this couple and their dog as bemused hostages. Another fun opportunity to take the roof off a house and see what is happening inside. 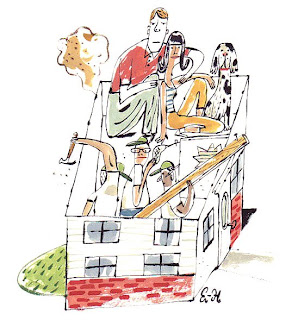 I had a few minutes and a bit of paper and this is the result. I like it. It isn't about anything. He's nobody in particular. It's not a self portrait. 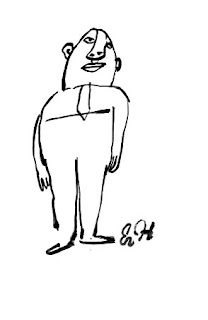 My friend Michael J. Rosen was doing a book about the ubiquitous Volkswagen and asked me if I wanted to contribute some drawings. I did. I love projects where I get to draw whatever I can think of. This is my favorite of the things I thought up about the VW. The opposite of Bond's Aston Martin. 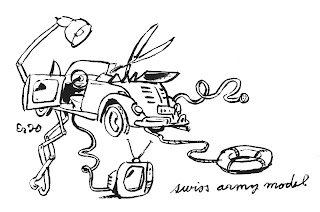 This dot series I painted for gallery sale also got into American Illustration, but it never caught on in everyday illustration assignments. Why? I suppose it's process. I paint the dots, then I paint the iconography freehand. It's hard to run that through a sketch approval process. These I painted by taking small details from paintings by Piero Della Francesca. I was recently back from Italy and still agog over everything Italian. One use I've gotten out of this dot style: the cover of my book. (See right.) The gallery that sold my paintings recently closed. I'm looking for a new one. 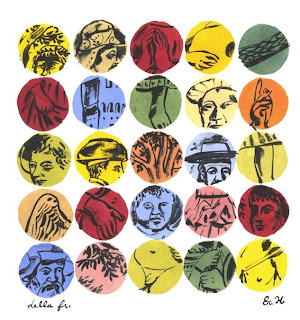