The op-ed I was asked to illustrate in the LATimes was about how the Supreme Court was being endangered by extreme partisanship. 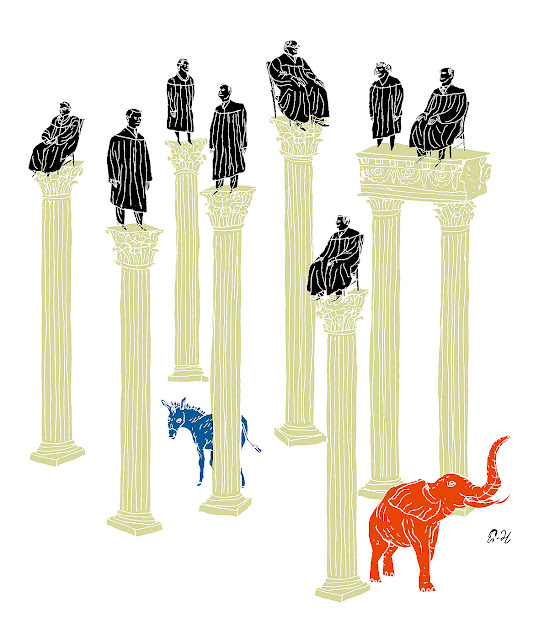 The trick with art like this is to avoid false equivalencies. I happen to think it's not a good idea to put hardline political operatives on the high court. I don't think it's wise to elevate an alleged sexual predator to the Supreme Court. I also think Americans might distrust a justice who has difficulties with telling the truth and seems skilled at hiding it. Call me old-fashioned...

So...here is the finished art. It isn't as sharp as I'd wanted to make it. False equivalency standards require both sides be pilloried or neither, which often tends to undermine the point. This art ended up blaming neither party for this episode. In my opinion the old American principle of "majority rules" was exercised by the Republican majority (to take a hypothetical example) as two men might force their wishes upon a 15 year-old girl in a locked bedroom.

Or is that too hypothetical? Certainly no self-respecting elephant would act that way.
Posted by Er-H at 4:27 PM 1 comment:

Another Visual Metaphor––When Is Something Really Something Else? 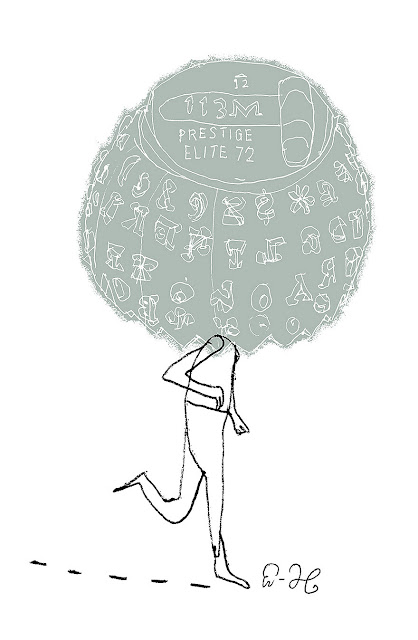 I watched a documentary recently called California Typewriter and found myself drawing typewriters for a few days afterwards. This was one of the ideas that popped up. I never owned a Selectric but always found the orb-shaped cartridge interesting. It seemed illogical (the gyrations required seemed overly elaborate)––but in use it proved very logical. It squeezed a complex sorting of letters into a very compact package, the most elegant of compact packages, the orb. It functioned in spite of itself. Sort of like the weird idea FedEx had of sending packages from New York to New Rochelle via Memphis. The central clearing house idea. It seemed cockeyed until it simplified the process.

Metaphors, likewise, emerge from concepts that seem odd or anomalous. Relations that seem remote that turn out to be direct. This is what analogies and similes are. Useful shorthand that forces the mind to make sense of something odd, a process which makes the idea seem absolutely right and commonplace. The obvious choice isn't always the best choice. (The shortest path between NY and New Rochelle might actually be Memphis.)

This is the key difference between direct representative illustration and metaphorical, idea-based illustration. A drawn metaphor works best if it remains simple, even blunt or crudely rendered. Not obvious or explicit. The more it looks like the image drawn the less likely it will suggest the idea or thing it's being compared to.

This drawing (above) would be a more successful metaphor if the Selectric orb were dropped into a planetary system, if it were revolving around the sun, for instance, or if it were being passed from player to player like a basketball. That said, I like the oddity of this running figure. I don't know what it means. That is what sketchbooks are for. For now I'm storing that drawing of the Selectric orb in this collage and may use it elsewhere someday.
Posted by Er-H at 12:57 PM 1 comment: