I am a close observer of events and politics and often go to bed with the latest outrage in my head. Sometimes I wake up in the night with an idea. Sometimes that idea doesn't take shape until I put pencil to paper the next day. But however quick my response is, the lifespan of a political metaphor can be very short. I send new drawings to my usual clients as soon as I draw them because the topic won't be relevant for long. Each outrage seems to be superseded by a new and greater outrage. I drew a lot of political art from 2000  to 2008, then No-Drama Obama calmed things for eight years, except as outrages were hurled at him by the Republicans. Now a strange outrage factory has moved into the White House and Congress. Here is a drawing I did as information emerged about Attorney General Jefferson Davis Beauregard Sessions and his flirtations with the Russians. New outrages have fallen like hard rain in the days since, making this drawing old news. The quote is adapted from an angry disavowal from the late 90s. 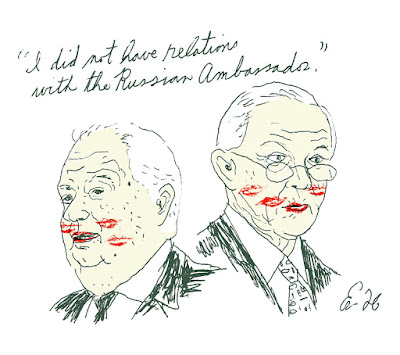